It's no secret that river and small ship cruising is one of travel's biggest trends. What may still be an open secret is the boom in cruising on the inland waterways of North America, with new ships and new itineraries to appeal to every cruise traveler's interests.
Maybe you want to try river and small ship cruising in your own backyard before venturing overseas. Maybe you've done it all and realized the incredible cruising experiences opening up in your own backyard! Maybe you just want a cruise with no or minimal flights and jet lag. Or an 'easy button' family vacation.
Lynn Elmhirst, Producer/Host of BestTrip TV and cruise expert, explains the unique highlights of 6 river and fresh water small ship cruises from the West Coast to the East that will have you thinking about a North American 'staycation' for your next cruise – in some cases, no passport required!

UnCruise Adventures' name makes it clear: this is a different kind of cruise line, focused entirely on active outdoor exploration by small ship.The Seattle-based company focuses on the Pacific side of America: small ship coastal cruises from Alaska to Central America, and year-round in Hawaii, with fares inclusive of fine dining, wine, spirits, shore activities and equipment. 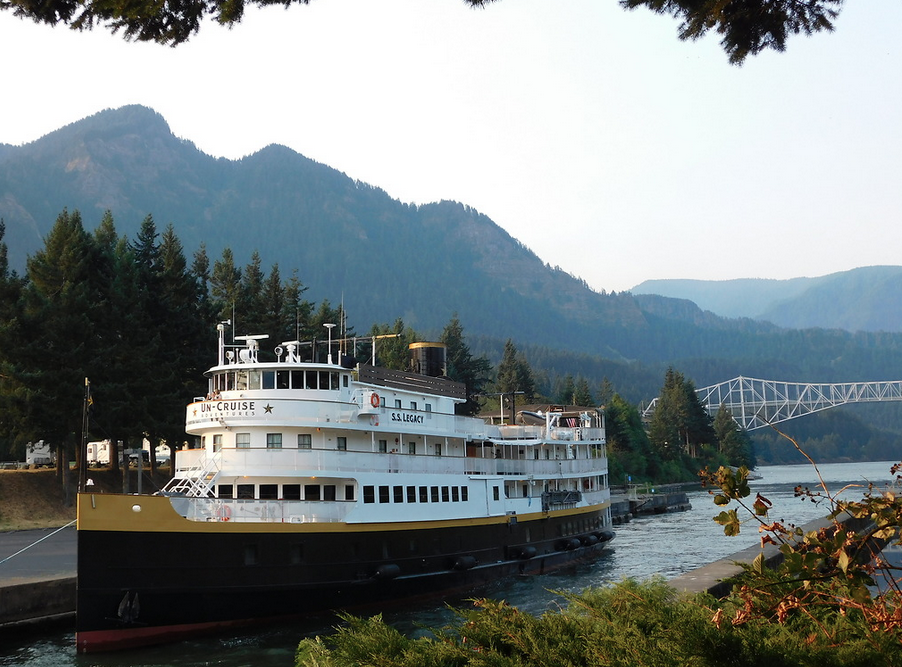 UnCruise Adventurs' only dedicated river itinerary is its autumn, 7-night cruises on the Columbia & Snake Rivers in the Pacific North West, where they say you'll find some of the most magnificent scenery in the US in the Columbia River Gorge.
Early autumn cruises highlight the Lewis & Clark expedition route, Nature and soft adventure: rafting, hiking, a jet boat ride into Hells Canyon, kayaking, even a cycling/winery excursion.
November 'Rivers of Wine & Culinary' themed voyages feature the region's increasingly well-known AVA's. Their onboard culinary program is linked with shore excursions featuring UnCruise Adventure's own sommelier, other wine experts, winery tours, wine-pairing dinners and local scenic highlights. 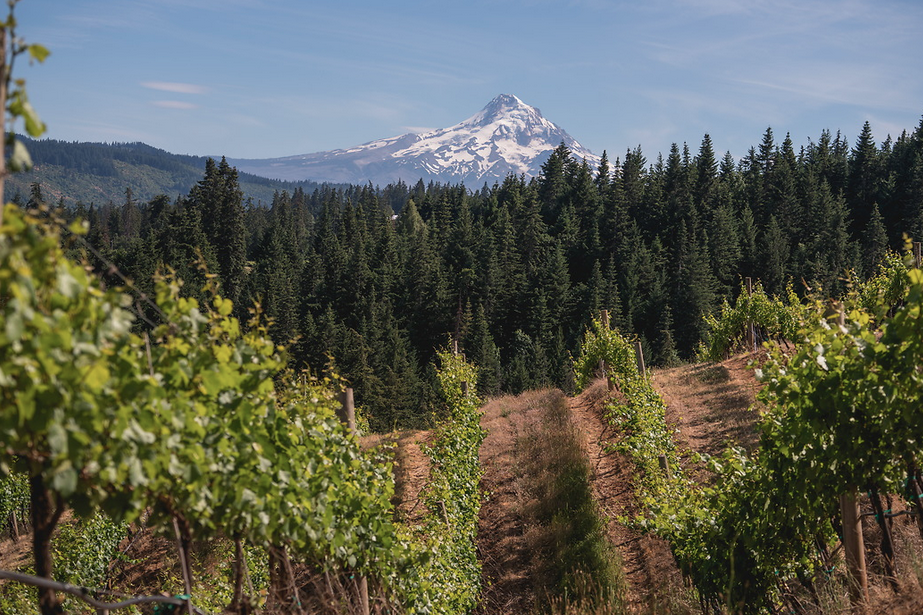 The company also has a family program, Family Discoveries, with savings for children 8-13 years old, providing multi-generational families with plenty of outdoor activities to bond over.

The Mississippi River and Beyond on American Cruise Lines

The great Mississippi is the artery that has served America's heartland for centuries.Mark Twain's literary works immortalized the world of sailing and living along the Mississippi, and today, the mystique of the Mississippi remains, even as the modern world has caught up to river cruising. 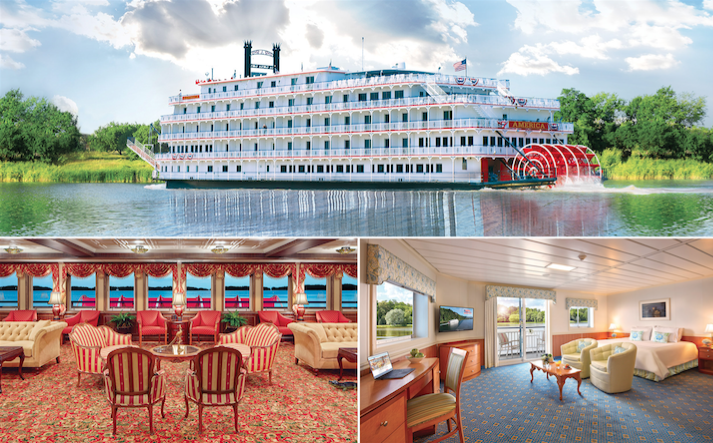 American Cruise Lines offers 3 different styles of ships for gueststo choose from, all built in the US, with among the largest staterooms in the industry: Victorianpaddlewheelers (above), fully-stabilizedcoastal ships, and the first and onlymodern riverboats in the country (below). 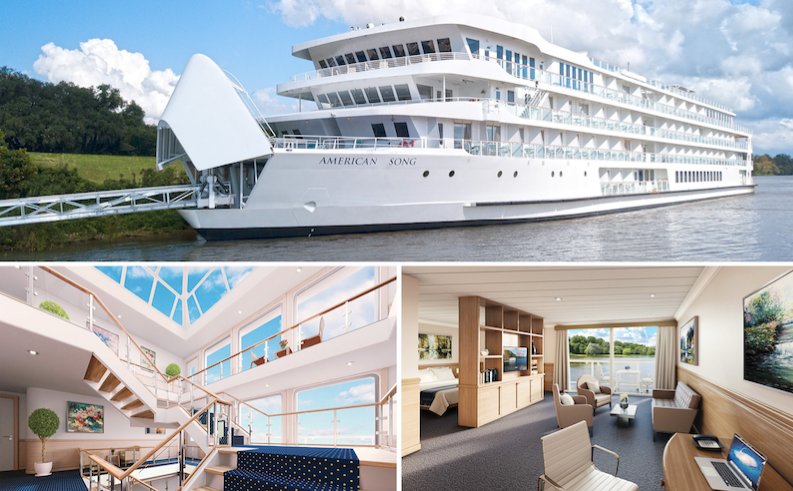 This range of vessels cruises three-dozen itineraries in 25 US states, along greatrivers the Mississippi and the Columbia & Snake Rivers, and both the Atlantic and Pacific coasts. But the company's 9 Mississippi itineraries remain the most popular for Americans and Canadians, who often drive over the border to northern departure gateways to cruise itineraries between St. Louis all the way south to New Orleans, with calls that feature treasured Americana including Elvis' Graceland, Ante-bellum southern plantations, and the stunning design icon and newly re-opened St. Louis Arch.
All American Cruise Lines share its river-cruise style: all-inclusive fine dining,complimentary evening cocktail hours, pre-cruise hotel stays, gratuities, wine and beer with lunch &dinner, complimentaryonboard entertainment and lectures,and many includedfeatured shore excursions.

One of their three boats (with another launching in 2020) was the first all-suite paddle-wheeler in the US. Another lays claim to being the largest, most opulent riverboat in the world. The vessel is an engineering marvel, six decks high, longer than a football field, but still with the lacy white trim and paddlewheel you associate with the era of waistcoated gamblers and damsels with parasols. Both sail itineraries on the Mississippi between iconic river port cities like New Orleans, Nashville, Memphis, Louisville and St. Louis. The third is the largest overnight riverboat West of the Mississippi, sailing on the Columbia & Snake Rivers with a vast collection of historic artifacts and Native artwork. 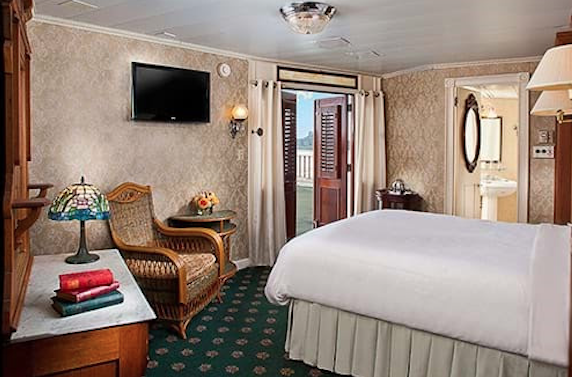 The cruise line has a unique, and popular, approach to shore excursions, many included with your fare.Deluxe coaches drive the itinerary's route in tandem with the boats. In port, they provide 'Hop-on, Hop-off' service, continuously making the round of major local attractions, so guests can select the attractions they most want to see, and enjoy them at their own pace.
Sister cruise line Victory Cruise Lines has two newly upgraded ships serving guests wanting to sail along North America's coasts, including the Great Lakes, St. Lawrence Seaway, Canada & New England itineraries, and an upcoming new ship in 2021 setting sail for British Columbia and Alaskan itineraries. Guests on this cruise line travel with historians and naturalists and enjoy inclusive shore excursions for expert immersion into these destinations in North American's backyards.

The Great Lakes on Tauck

Cross-border cruising can't get any better! Tauck is known for ultra-luxury land tours and safaris, as well as European river cruises.But in addition to North American land tours, it provides a one-of-a-kind Great Lakes small ship itinerary that's tailor-made for both American and Canadian guests. 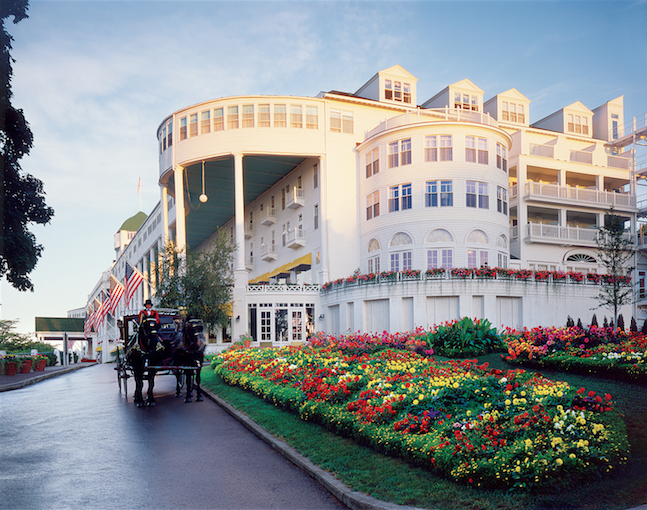 Tauck's autumn cruise between the dynamic Canadian and US cities of Toronto and Chicago bookends the voyage with included pre- and post stays in Fairmont or Four Seasons hotels in both cities. The 7-night voyage between those world-class cities highlights seasonal foliage along the coasts, and includes Niagara Falls and Niagara on the Lake, Detroit, and smaller destinations (like Michigan's Mackinac Island, above) along both countries' coasts, with exclusive and included shore excursions that feature Nature, sport, culture, makers, and history along the way. 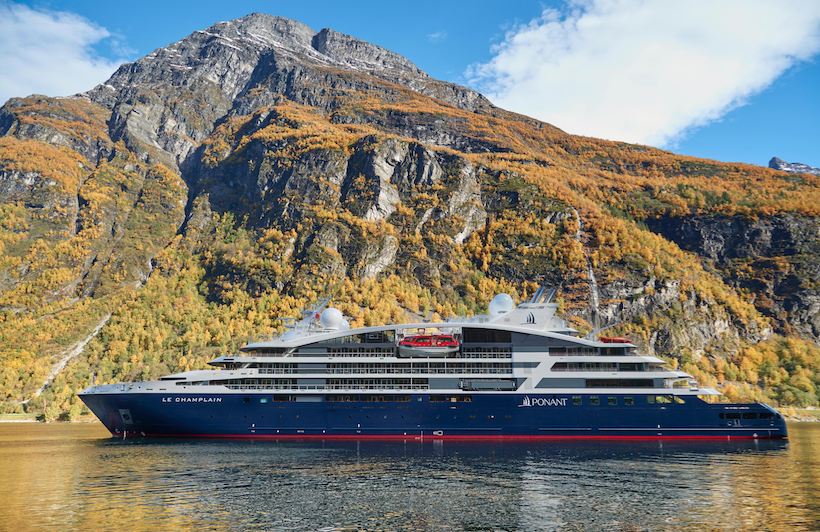 Tauck is using one of luxury French line Ponant's elegant and eco-friendly, 160-guest, 5-star ships for the itinerary, with private balconies, iPod docks, mini bars and all-included service and on board service including wine, spirits in several lounges, and dining at 2 venues.

This sister company to American Cruise Lines uses the only fully-stabilized small cruise ship on the Great Lakes and the entire Pearl Mist ship (very similar to American’s coastal ships) has spacious, all-balcony, all outward-facing staterooms. The 210-guest ship also features open sundecks, a fitness area, and a glass-enclosed spacious dining room so you never miss a beautiful sunset or scenery floating by.

Two itineraries allow you to explore the gems of the Great Lakes' world-class cities and charming smaller and lakeside holiday communities: an 11-day, Great Lakes and Georgian Bay itinerary from Milwaukee to Toronto that cruises through vast and lovely Georgian Bay, and calls in Niagara as well as Mackinac Island, and a 7-night Great Lakes cruise that also begins / ends in Milwaukee and Toronto, but provides travelers with less time a condensed cruise that still allows them to experience their own backyard from its freshwater ports.

Le Boat has been operating 'self drive' cruises on the canals and waterways of Europe for half a century, and in 2018 introduced their first North American itinerary. It's a one-of-a-kind cruise on Ontario's UNESCO World Heritage Rideau Canal, the oldest continuously-operated canal system on the continent.
Begun in 1826, the Rideau Canal remains today one of North America's most beautiful navigable waterways. You'll be able to swim, fish, cycle and stroll, seeing exquisite stone-masonry and pastoral countryside between Canada's original Canadian capital of Kingston on Lake Ontario, and the current national capital, Ottawa (pictured below), at the other end of the 125 mile-long canal. There are 47 Locks on the Rideau, many with staff members to help boaters through the locks, and a lock pass is included in your fare.Where other cruises charge by the guest, LeBoat hires out the vessels, making it a highly cost-effective choice for families and even groups including solo travelers.It also means you can set the pace and follow your own itinerary.A tutorial before you go gives you confidence driving the boat. 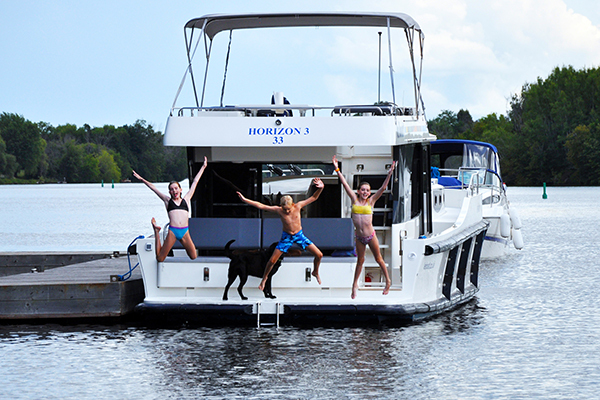 But don't confuse LeBoat with the houseboat rental experience you may be familiar with – this is more like what LeBoat calls pet-friendly 'floating villas'. LeBoat's fleet includes new, upscale European models designed for larger groups – some as big as 5-cabin/5-bath models that sleep 12 people! – with en-suite bathrooms, expansive 'fundecks', barbecues, air-conditioning, even dishwashers in fully-equipped kitchens. You provide your own food, drink, fuel, and fun. 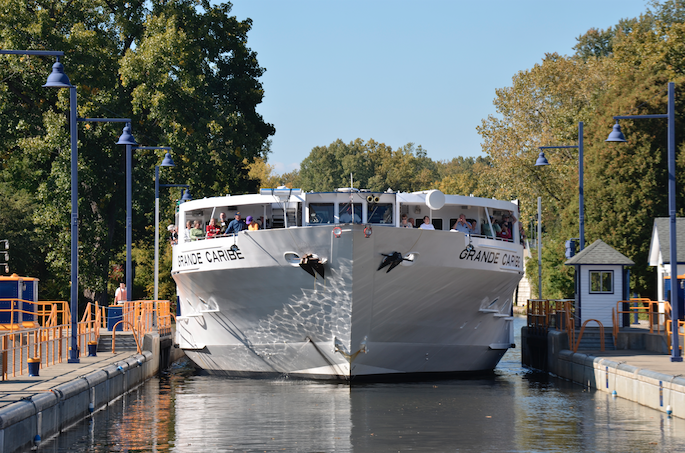 Guests love the casual, no dress-up atmosphere, complimentary wine and beer with meals, and a related perk that will astound seasoned cruise travelers: a BYOB policy! Not only can you provide your own wine and spirits (or buy them at local, craft wineries and distilleries along the cruise), Blount even facilitates the process, providing mixers, garnishes and barware, so you can 'pour as you please' for your entire cruise!
The Great American Waterways itinerary remains the family-owned and –operated company's most popular voyage. But Blount considers the entire Atlantic Coast part of its cruising 'territory', with itineraries sailing coastal New England and the Canadian maritimes into the St. Lawrence seaway (pictured, top, at New York's Singer Castle), as well as winter itineraries in the Bahamas.

Images courtesy of their respective cruise lines.
Copyright BestTrip.TV/Influence Entertainment Group Inc or Rights Holder. All rights reserved. You are welcome to share this material from this page, but it may not be published, broadcast, rewritten or redistributed.

Bubble Cruising? Yes, You Can Cruise Close to Home

COVID's impact on travel is having one brilliant effect: it's shining a spotlight on the boom in cruising on the wate... learn more

What's a Travel Bubble? Plus 3 Tips For Making the Most of Yours

You might see this view sooner than you think.The world of travel has begun to re-open. But it’s not like the ta... learn more